Alejandro Adem is a Professor in the Department of Mathematics at the University of British Columbia and President of the Natural Sciences and Engineering Research Council of Canada. Before joining NSERC, he was CEO and Scientific Director of Mitacs (2015–19). Prior to that, he served as Director (2008–2015) of the Pacific Institute for the Mathematical Sciences.

Marie-Josée Hébert is a nephrologist-transplanter and researcher at the CHUM, a Professor in the Faculty of Medicine and the Shire Chair in Nephrology and Renal Transplantation and Regeneration of the University of Montreal. She holds a specialized diploma in nephrology from the Université de Montréal and postdoctoral training at Harvard University. She is also co-director of the National Transplantation Research Program of Canada.

Recognized worldwide as one of the leading experts in artificial intelligence, Yoshua Bengio is most known for his pioneering work in deep learning, earning him the 2018 A.M. Turing Award with Geoffrey Hinton and Yann LeCun. He is a Professor at Université de Montréal, and the Founder and Scientific Director of Mila – Quebec AI Institute.

Nathalie de Marcellis-Warin is a Professor at Polytechnique Montréal in the Department of Mathematics and Industrial Engineering and a Visiting Scientist at the Harvard Center for Risk Analysis, Department of Environmental Health at Harvard T. Chan School of Public Health. She is the CEO of CIRANO since 2016. She was one of the contributors to the Montreal Declaration for a Responsible Development of AI.

Andrew Granville is a Professor at the Université de Montréal since 2002. He was an invited speaker at the 1994 International Congress of Mathematicians and is one of the world’s most recognized experts in analytic number theory. At the Université de Montréal, he has developed an outstanding school in this field, the strength of which is underlined by the Fields Medal awarded in 2022 to one of his former postdoctoral researcher, James Maynard.

A Professor in the Department of Mathematics and Statistics at UdeM since 2003, he works in topology.  He was invited speaker at the Mathematical Congress of the Americas in 2013. He is director of the Centre de recherches mathématiques since 2021 and he has previously served as director of the Institut des Sciences Mathématiques. 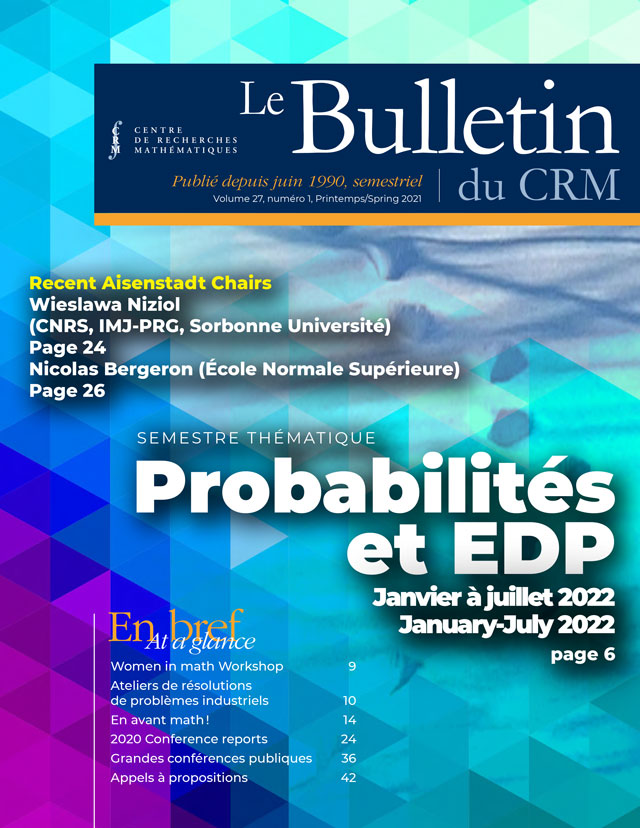 The CRM is proud to support the Université de Montréal’s vision of equity, diversity and inclusion.